The overall goal of this project is to determine the contribution of motion-dependent afferent pathways, selected ascending and descending pathways in the spinocerebellar loop, and the central pattern generator (CPG) circuitry to the generation of the distinct kinematic and muscle synergies during normal walking and epidural stimulation(ES)-activated walking in cats with intact and partially transected spinal cord. This goal will be accomplished in experimental and neuromechanical computational studies performed in close collaboration among 4 research groups (Georgia Institute of Technology; Karolinska Institute, Sweden; Drexel University and Pavlov Institute of Physiology, Russia). We anticipate that this study will improve our understanding of how ES, sensory and supraspinal inputs, and CPG contribute to kinematic and muscle synergies during locomotion and thus will provide scientific basis for improvement of ES- stimulation therapies.

The overall goal of this collaborative project is to use state-of-art genetic, molecular, and physiological studies of spinal neurons and neural circuits in combination with computational modeling to dissect the organization and operating mechanisms of the spinal locomotor central pattern generator (CPG). As demonstrated in rodents and cats, activation of the spinal locomotor CPG leads to the restoration of locomotion after upper spinal cord injury. The proposed study will provide an important theoretical basis for the future development of new, effective methods for restoring locomotor function after spinal cord injury and various degenerative disorders affecting normal locomotion.The central issues addressed in this study include understanding the rhythm-generating mechanisms operating in the spinal cord as well as the organization of flexor-extensor interactions. 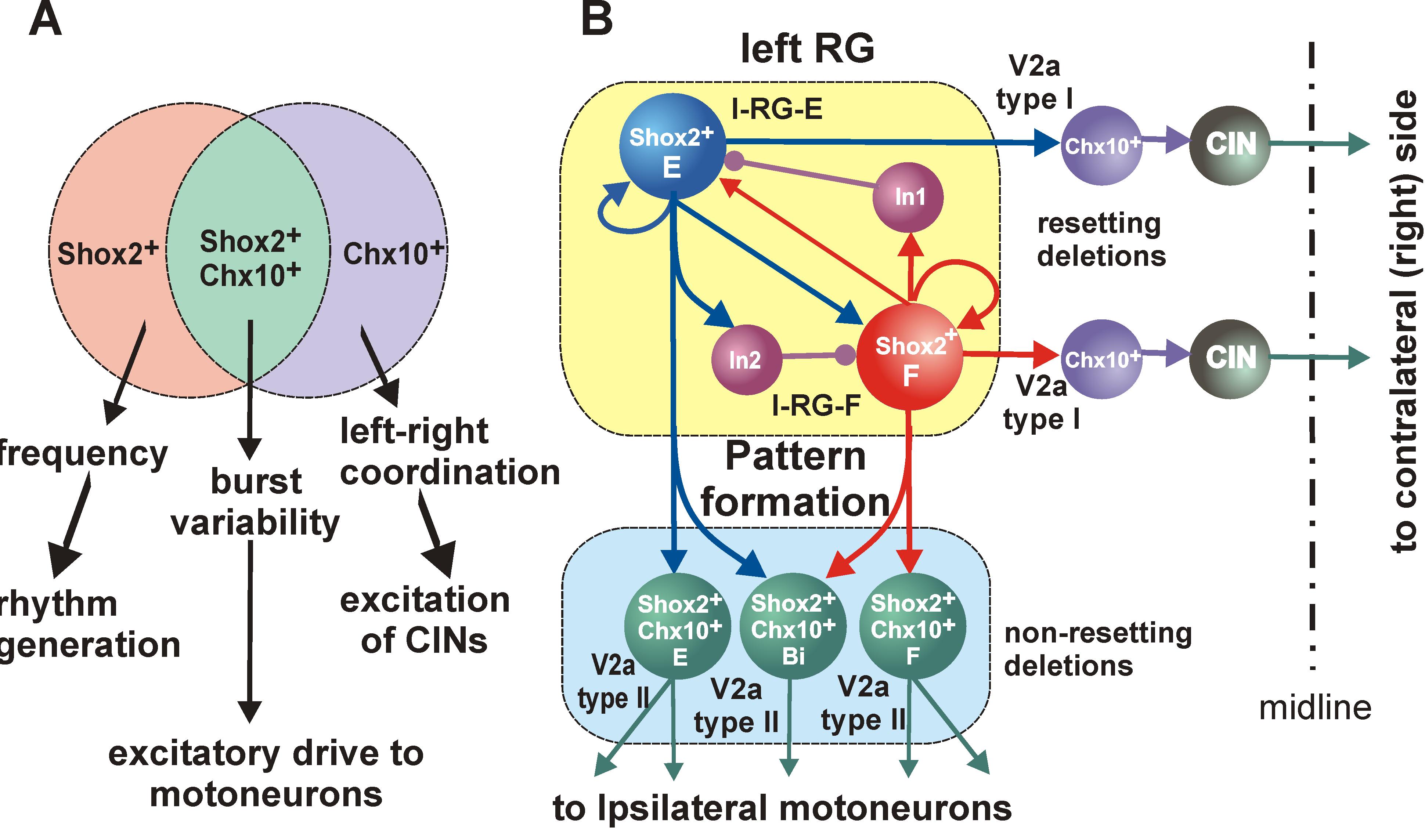 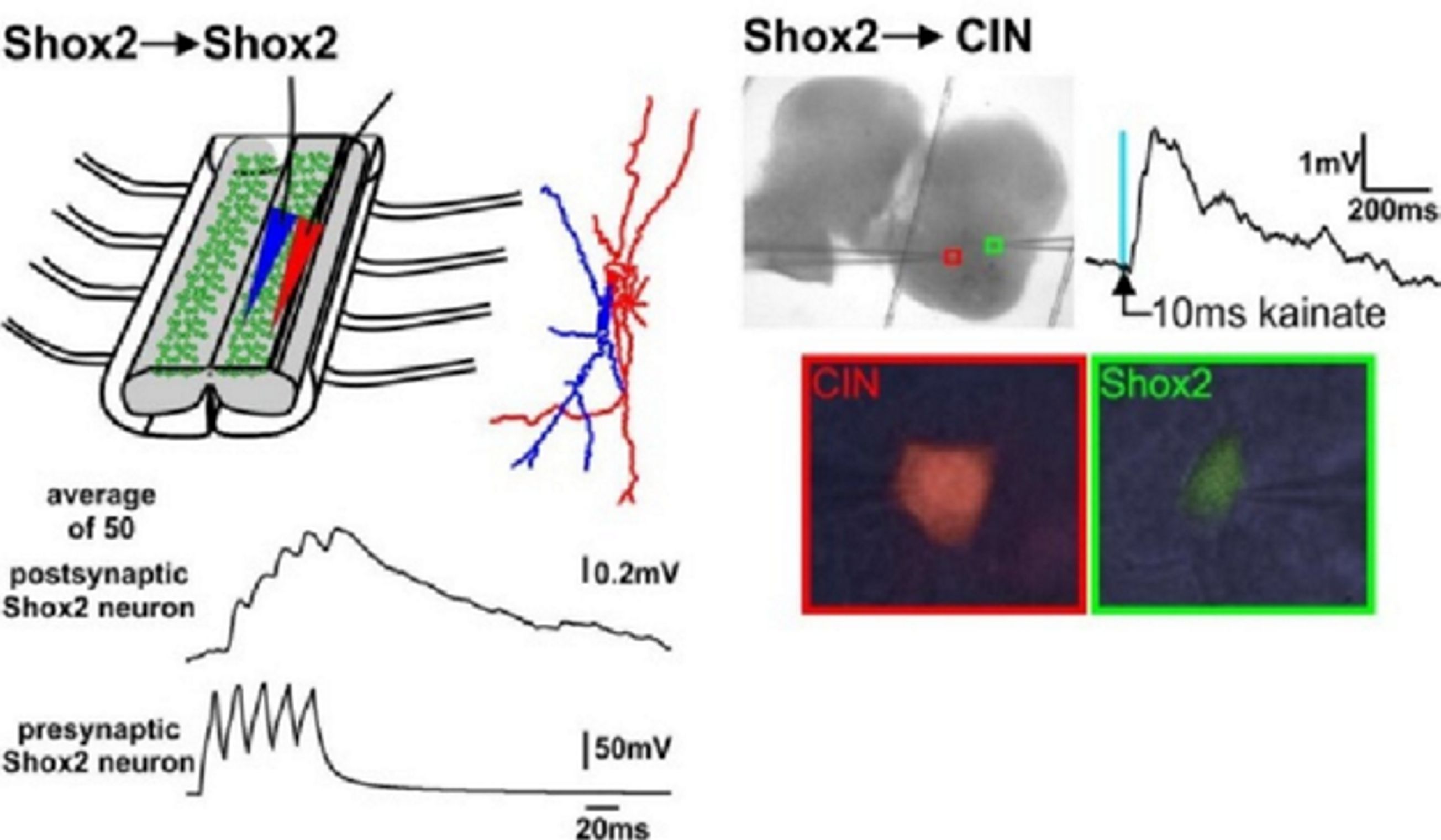 We propose to (a) investigate recently identified spinal interneurons that are considered to belong to rhythm-generating circuits, (b) identify their connectivity pattern, and (c) determine the functional links between these neurons and other key components in the spinal locomotor CPG. The project brings together two laboratories with complementary expertise in experimental and computational neuroscience to: SA1. Determine and investigate the cellular basis of rhythmic bursting in Shox2 neurons and their mutual interactions. Investigate potential differences between these neurons with flexor- vs. extensor-related activity. SA2. Investigate inhibitory interactions between the flexor- and extensor-related rhythm-generating neurons and the role of genetically-identified V2b and V1 neurons in these interactions. SA3. Investigate properties of neuronal and network organization leading to the frequency-dependent flexor-extensor asymmetry and study interactions between flexor-extensor and left-right coordinating networks. The model will be progressively developed by continuous interaction with the experimental studies and will serve both as a testbed for working concepts on the organization of the rhythm generating circuits in the spinal cord and as a source of predictions for subsequent experimental validation.

The overall goal of this project is to dissect the organization of the spinal CPG with focus on the organization of flexor-extensor alternating and left-right coordinating circuits. All work will be done on identifiable classes of spinal interneurons labeled by genetic markers in transgenic mice and/or classified by anatomic or electrophysiological labeling needed to obtain a unified picture of the CPG organization. We propose to identify the functional connectome and the interactions between these fundamental components of the CPG. The experiments performed will use a combination of electrophysiological, imaging, and molecular biology techniques complemented with advanced computer modeling. The three PIs involved in this project have strong background and experience in spinal cord studies and unique expertise in physiological, genetic and molecular methods (Martyn Goulding and Ole Kiehn) and computational modeling (Ilya Rybak). The Specific Aims of the project include: investigation of activity patterns and connectivity of the genetically identified spinal interneurons responsible for left-right coordination during locomotion (Aim 1), investigation of the genetically identified spinal interneurons and their connectivity responsible for flexor-extensor alternation and their interactions with the circuits providing left-right coordination (Aim 2), development of a comprehensive computational model of spinal cord circuits (Aim 3). The proposed multidisciplinary approach based on the state-of-art methods and close collaboration between the three leading labs will investigate and analyze the specific contributions of left-right and flexor-extensor coordinating neuronal circuits and their interactions to the generation and control of the locomotor pattern and provide important insights into the neural organization of the mammalian spinal cord, leading to new strategies to treat spinal cord injury and degeneration spinal cord disorders.


CRCNS: Organization of locomotor CPG in the rodent spinal cord

This project combines electrophysiological and modeling approaches to study the organization and neuronal composition of the Central Pattern Generator (CPG) neural circuits in the mammalian spinal cord that coordinate rhythmic neural activity driving locomotion. This study will take a general approach that utilizes various spontaneous and evoked perturbations in the locomotor pattern (including deletions of motoneuron activity, spinal cord lesions and pharmacological manipulations) as probes to understand CPG organization and function. It is proposed that analysis of the influences of these perturbations on the rhythmic motor pattern and the activity of identified spinal interneurons will provide important insights on the spinal CPG organization and operation. These data will be used to develop a comprehensive computational model of the spinal locomotor CPG, and to refine and validate this model, so that it can reproduce both normal locomotor activity and the consequences of experimental perturbations. In predictions to guide subsequent experimental investigations. The project brings together two senior scientists with complementary and overlapping expertise in experimental (Dr. Harris-Warrick at Cornell University) and computational (Dr. Rybak at Drexel University) neuroscience. It has three interlocking objectives: 1) Explore alterations in behavior of, and synaptic drive to, motoneurons and genetically defined interneurons during spontaneous and evoked deletions in flexor and/or extensor rhythmic motor activity, to define the possible function of these interneurons in the locomotor CPG. 2) Explore the consequences of reducing CPG complexity by spinal cord hemisection and removal of spinal segments, and compare the behavior of identified interneurons in the reduced cord during deletions and after pharmacological blockade of synaptic inhibition. 3) Develop a comprehensive computational model of the neural circuits forming the locomotor CPG in the neonatal mouse spinal cord that includes genetically identified interneurons and suggests their roles in the generation of the locomotor pattern. Validate this model in simulations reproducing the specific transformations in motoneuron and interneuron activity and the entire locomotor pattern during experimental perturbations proposed in objectives 1 and 2.The model will be progressively developed by continuous interaction with the experimental studies, and will serve both as a testbed for working concepts on spinal cord organization and as a source of predictions for subsequent experimental validation. Better understanding of the organization and function of the spinal CPG will provide essential insights into future clinical strategies for restoration of locomotor function after spinal cord injury. 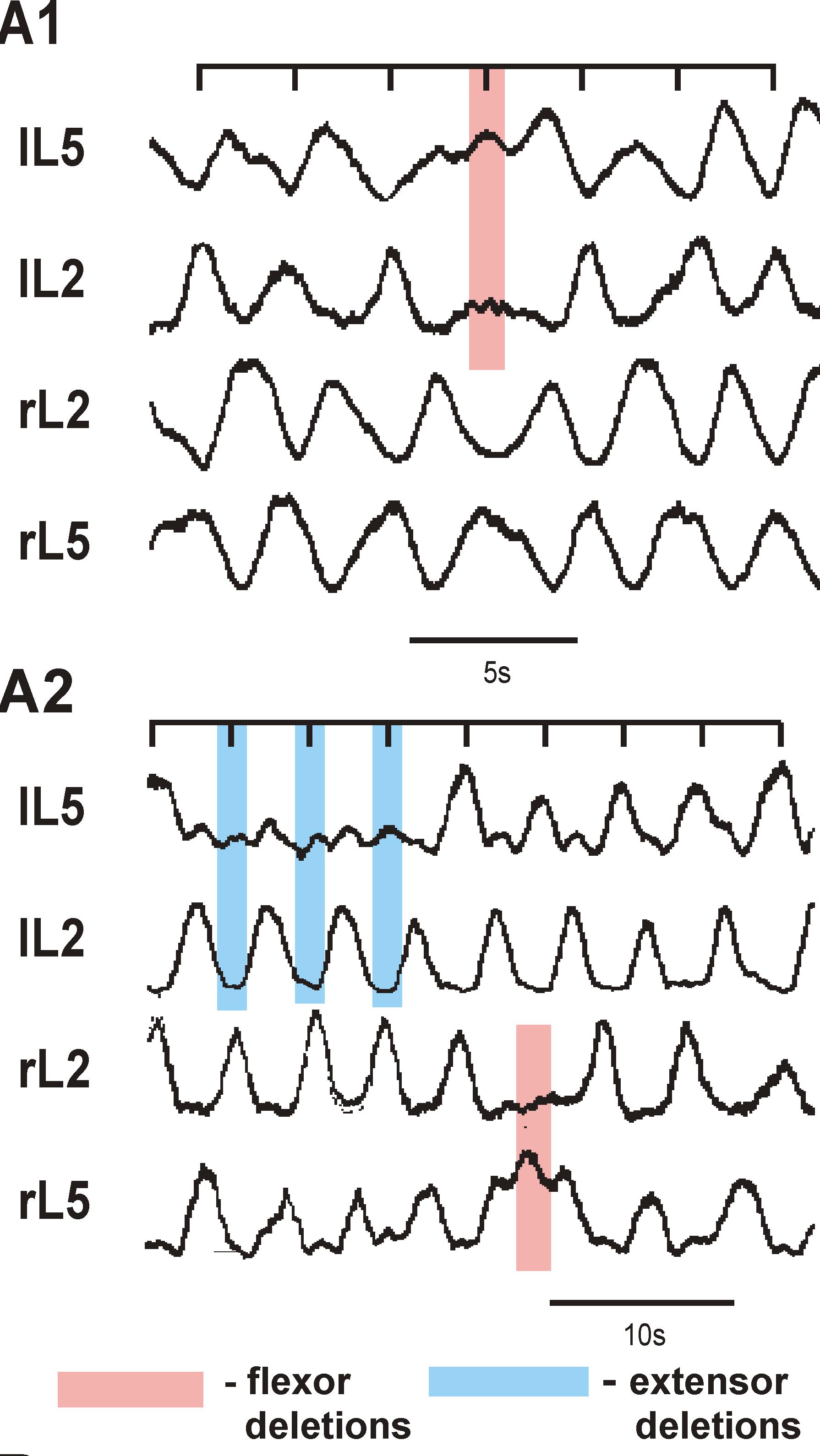 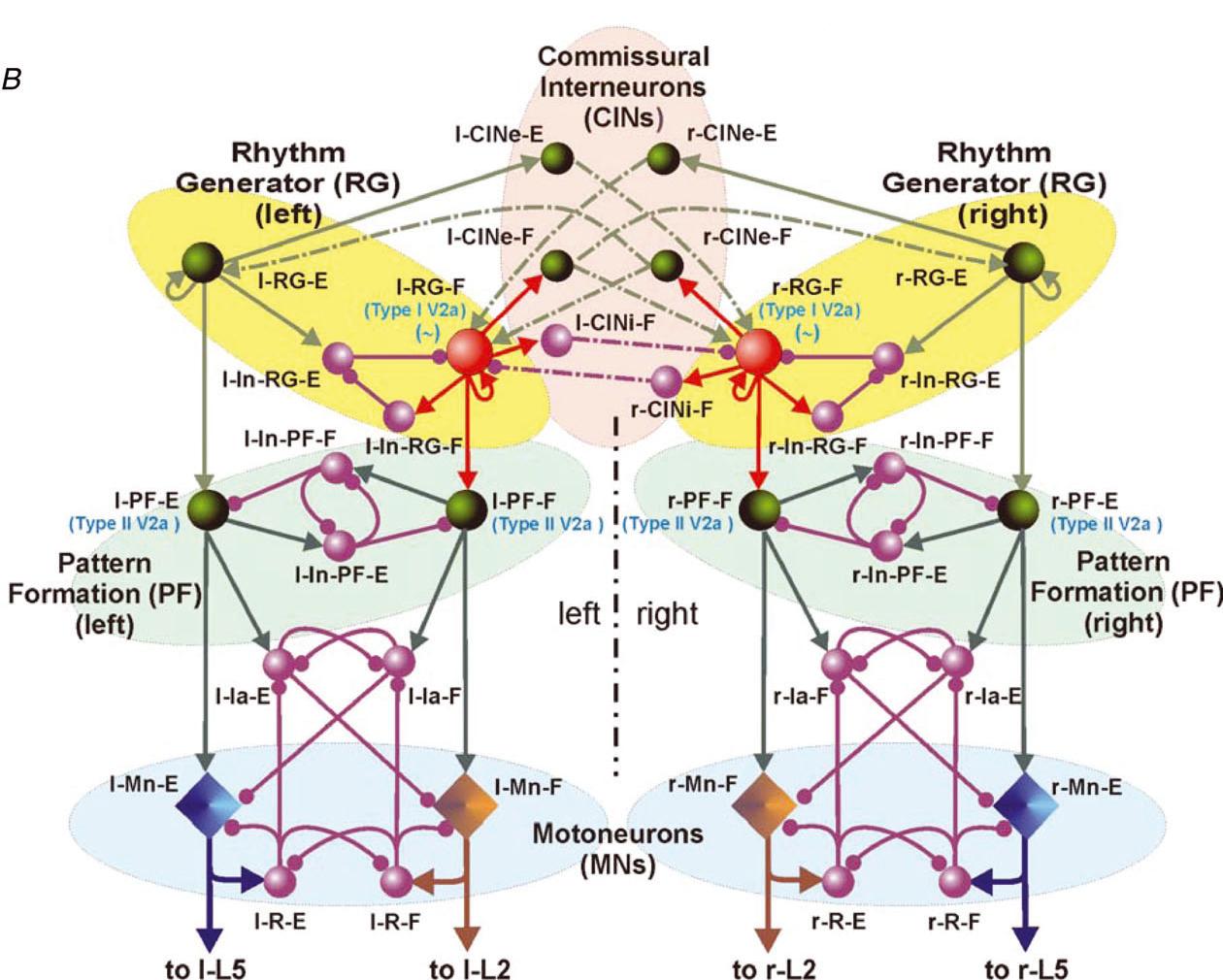 The specific aims of this multi-institutional project are: (1) develop a Physiome-type, predictive, multiscale computational model of neural control of breathing that links multiple physiological mechanisms and processes involved in the vital function of breathing but operating at different scales of functional and structural organization, (2) validate this model in a series of complementary experimental investigations and (3) use the model as a computational framework for formulating predictions about possible sources and mechanisms of respiratory pattern alteration associated with heart failure. The project brings together a multidisciplinary team of scientists with long standing collaboration and complementary expertise in respiration physiology, neuroscience and translational medical studies (Thomas E. Dick, Case Western Reserve University;Julian F.R. Paton, University of Bristol, UK; Robert F. Rogers, Drexel University; Jeffrey C. Smith, NINDS, NIH, intramural), mathematics, system analysis and bioengineering (Alona Ben-Tal, Massey University, NZ), and computational neuroscience and neural control (Ilya A. Rybak, Drexel University). The end result of our proposed cross-disciplinary modeling and experimental studies will be the development and implementation of a new, fully operational, multiscale model of the integrated neurophysiological control system for breathing based on the current state of physiological knowledge. This model can then be used as a computational framework for formulating predictions about possible neural mechanisms of respiratory diseases and suggesting possible treatments.

This project represents the first steps towards the ultimate goal of creating a comprehensive multi-level, multi-scale neural model of the motor control system. The model will ultimately serve as a test bed for studying motor dysfunctions associated with and/or resulted from Huntington's disease (HD). We will take a multi-resolution modeling approach in which more detailed cellular and network neuron models (representing various CNS regions) will be sequentially incorporated into a larger systems-level model that produces simulated movements. The initial low-resolution systems-level model will describe system interactions between the major brain structures (nuclei, represented as model compartments) involved in planning, learning, and control of individual and successive arm reaching movements. We will consider (simulate and investigate) multiple interrelated motor/behavioral processes involving the basal ganglia (BG) including goal-directed reaching movements, decision-making between competing motor strategies, and motor task execution. The resultant model will provide a test bed for subsequent simulations of sequential reaching-related motor dysfunctions associated with HD, as well as for predictions of the possible effects of HD treatments at various functional levels. 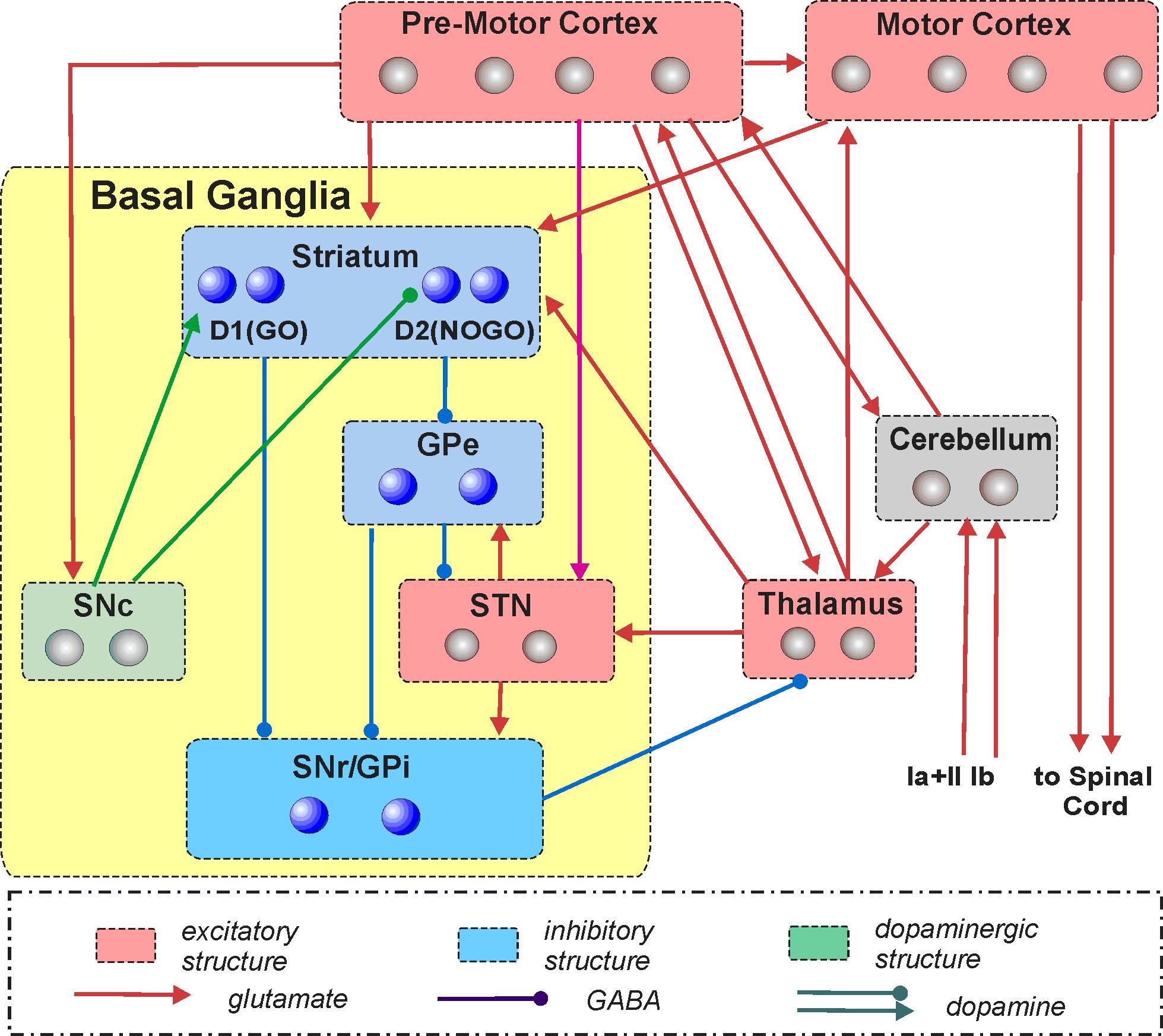 Computational studies of the respiratory brainstem

Modeling the brainstem neural mechanisms for the respiratory pattern generation


A model of attention-guided visual perception and recognition

Past and Present Funding (NIH, NSF)